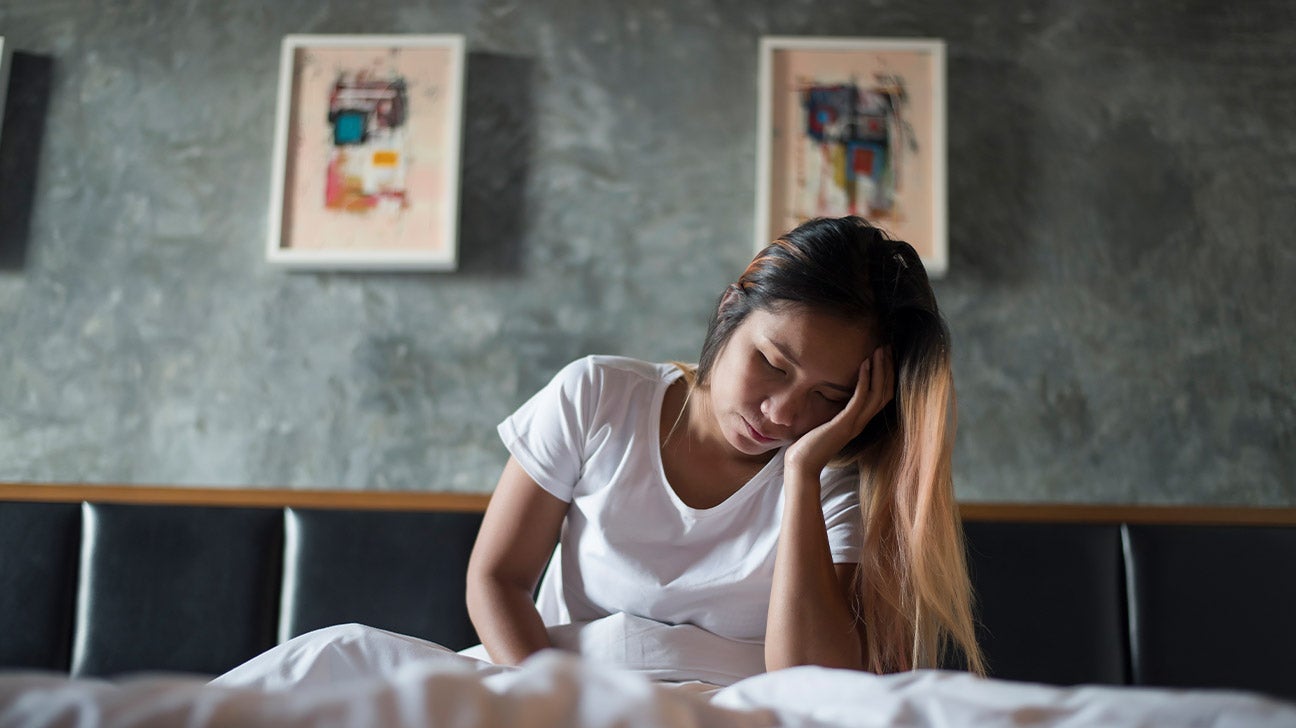 To everyone else in this world, I look like a normal 30-something woman. People at the grocery store bump into me and apologize without a second thought, not even realizing that my center of balance is already shaky because of my migraine disorder.

At work, I tell my co-worker or manager that I need to leave because I can feel an attack is coming and must drive home before it becomes too difficult to see. They say “feel better” with an air of suspicion in their voice as I hurry out the door.

When I turn down certain foods at a party because of my migraine disorder, the host becomes frustrated with my dietary limitations.

While I may look healthy to everyone else, no one can see the times I feel as though I’m walking on marshmallows or dropping when I am sitting perfectly still.

With my type of migraine disorder, vestibular migraine, I get really odd sensations like Alice in Wonderland syndrome, along with the typical light and sound sensitivity most others experience. My attacks usually come without head pain, but that doesn’t mean the vertigo attacks I experience don’t leave me in bed for hours to days.

The common frustration for those with migraine disorders is that we live with an invisible illness. It’s not always obvious when we’re suffering.

Others don’t quite understand the effort we have to go through and how exhausting that can be on a day to day basis. Here are a few things I wish they knew.

Migraine is not ‘just a headache’

There are actually many types of migraine, such as ocular, hemiplegic, vestibular, and migraine with or without aura. Some of these may not even present themselves with head pain, like with vestibular migraine.

As someone who is an advocate for this particular type, it’s incredibly frustrating when friends or family ask me how my headaches are, even after multiple attempts to share that I don’t get “headaches.”

Although I’m appreciative of their concern, it shows the stereotype still remains that migraine is just a really bad headache.

For someone who is experiencing weakness on one side of the body or impaired consciousness, as you do with hemiplegic migraine, this illness being compared to a headache is downright offensive. How often has a headache completely impaired your vision, made it difficult to speak, or given you vertigo?

We want to work without discrimination

People with migraine aren’t lazy, but the common perception is that a “migraine attack” is used as an excuse to get out of work.

Instead, we worry constantly about how we’re viewed by our peers and if we’ll be passed over promotions because of the time we’ve had to take off. Some fear that companies will never want to hire someone who needs to leave for routine health appointments or could be affected by an attack during a meeting.

Since the overwhelming perception is that migraine is just a headache, people assume it’s something that can be powered through. Employers are often less than accommodating to special needs for migraine, so we buy a range of tinted glasses, bring our rescue medications, and turn down the screen brightness on our computers just to try to get through.

Eventually many, like myself, are forced out of the workplace and are left to wonder if anyone will ever truly understand.

Before my migraine disorder started, I could travel around the world without a second thought. My biggest worry was getting through security and making my flight on time.

But for someone who experiences extreme motion sensitivity as a migraine symptom, it involves a lot of extra work and planning.

Not only do you have to pack accordingly, making sure your medications are all in order, but we also have to pack motion sickness bands, earplugs to alleviate pressure changes, headphones to go over those earplugs, and essential oils.

Even where you sit on the plane can play a huge factor in how we feel. There have been times my seat got moved to the back of the plane, where motion is most prevalent. Other times I have been separated from my travel companion who helps to guide me if my attack leaves me unstable.

Explaining to the gate agent that I have a migraine disability doesn’t often get me far, and I’m left to ask the people sitting around me if they’re kind enough to switch seats, all while still trying to avoid an attack from heightened anxiety.

For the times that they do allow accommodations for me, I get suspicious looks from the rest of the crowd as I board early. Usually traveling anywhere takes a great deal of planning, with rest days factored in as well.

And don’t even get me started about sitting next to someone with strong perfume.

We get really bad advice

When I mention I have a migraine disorder, it’s almost always responded to with “Have you tried (insert bogus thing here).”

Migraine remedies can range from the scientifically studied, like magnesium, to the downright odd, like putting a banana peel on your forehead. Of course someone’s cousin’s friend’s husband once cured their migraine by doing a headstand for 4 hours, so you should try that too! Note: Please do not try this.

While I’m happy some of these treatments worked for a select few, if they did, they probably weren’t facing a chronic migraine disorder. As someone who is desperate to work, travel, and just feel normal again, I can guarantee you that I’ve tried and researched so many things already.

Some notable migraine doctors say it would take a lifetime to try every treatment out there, so while it’s impossible to have tried everything, it can feel that way many days.

Everyone wants to sell us something

This usually goes along with the bad advice, but it never fails that this random person who you haven’t heard from since high school magically has the cure for your neurological disorder — and they can give you a deal on it, too!

It seems as though any time we share our struggles publicly, messages come in wanting to sell us the next best thing. And most of the time, it’s not something that has actually been proven to help.

It’s sad that people with chronic illnesses are often preyed on for a profit, but it happens every day. Since a lot of us have lost our jobs or have had our pay cut, and still have to pay for expensive medications and appointments, it can be challenging for us to take a chance on something.

One thing we do appreciate during tough times? Gifts that are sent with good intentions.

Migraine attacks can hit us at any moment, so when we cancel at the last minute, it’s truly nothing personal. There have been many times that I was very excited to hang out with friends, only to have a storm pop up and trigger symptoms for me because of pressure changes.

Other days, my symptoms are already heightened and I know going to a loud restaurant would set me over the edge. While I hate to have to cancel, I also know that I wouldn’t be much fun to hang out with.

Unfortunately, a cycle like this leads us to lose a lot of friendships. Migraine is already very isolating, between trying to juggle a job, doctors’ appointments, and high pain or dizzy days.

But when friends and family do stand by us, and forgive us for each cancellation or check in on us during an attack, it’s appreciated more than they will ever know.

Alicia Wolf is the owner of The Dizzy Cook, a diet and lifestyle website for anyone with migraine, and an ambassador for the Vestibular Disorder Association. After struggling with chronic vestibular migraine, she realized there weren’t many upbeat resources for people following a migraine diet, so she created thedizzycook.com. Her new cookbook “The Dizzy Cook: Managing Migraine with More Than 90 Comforting Recipes and Lifestyle Tips” is available almost everywhere books are sold. You can find her on Instagram, Facebook, and Twitter.